DISCOVER THE CITY OF ART

Sixteenth-century monastery which during the 70s holds  Belle Arti academy and the  comunal Pinacoteca – both borned 150 years early. Since 2002 the Museo d’Arte della Città became Institution

“The set of  the paleochristian and byzantine monuments of  Ravenna è di extraordinary importance due to the supreme artistic mastery of mosaics art. Also they are the proof of relationship and artistic and religious contact about a important historical period of European culture.” 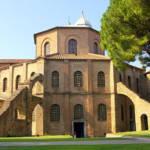 Ravenna is a treasure chest of art, history and culture, a city with ancient origins and a glorious past. From the beginning of the 5th century, the city has been the capital of the declining Western Roman Empire (402-403), of Theodoric’s reign (493-526) and of the Byzantine Empire (553-751).

The richest heritage of mosaics in the world, preserved in the basilicas and baptisteries of the city, is a clear evidence of that extraordinary period. For their universal value and the uniqueness of their mosaics, eight monuments of Ravenna have been included in the UNESCO World Heritage List, namely Mausoleum of Galla Placidia, Baptistery of Neonian, Arian Baptistery, Basilica of Sant’Apollinare Nuovo, Oratory of Sant’Andrea, Mausoleum of Theoderic, Basilica of San Vitale and Basilica of Sant’Apollinare in Classe. Besides the UNESCO monuments, other interesting artistic and archaeological sites such as the Domus dei Tappeti di Pietra (Domus of the Carpets of Stone) and the Area del Parco Archeologico di Classe (Classe Archaelogical Site) make a valuable contribution to the reconstruction of the history of Ravenna. During the declining period of the Latin civilization, Ravenna undoubtedly represented the most important political and cultural centre of the Western world. At the same time, the city shows traces of more recent times, from the Middle Ages to Contemporary age. Some of the most celebrated instances are the Tomb of Poet Dante Alighieri, the Brancaleone Fortress (Rocca Brancaleone), the Classense Library, the Municipal Tower (Torre Civica), as well as the monumental gates of the city. The cultural offer of Ravenna is abundant and varied. Its wide network of museums and collections  includes MAR, the City Art Museum of Ravenna, that organizes regular high-profile exhibitions and hosts a number of permanent collections; the National Museum, exhibiting a variety of collections and findings from excavations of Roman and Byzantine remains; the Archiepiscopal Museum hosts the Chapel of Sant’Andrea (belonging to the UNESCO Heritage);TAMO. All the adventure of the mosaic, a permanent, interactive and multimedia exhibition dedicated to the art of mosaic in all its aspects, from antiquity up to the present; Dante Museum houses relics connected with the cult and fame of the poet and the Museum of the Risorgimento, that bears witness to the followers of Mazzini and Garibaldi in Ravenna. A great variety of landscapes surround Ravenna, ranging from farmlands with fruit groves, marshes and canals flanked by typical fishing nets to centuries-old pinewoods looking over sandy, well-equipped beaches. Nine unique seaside resorts rise along its 30-km long coastline. Its beaches offer a wide range of facilities and leisure activities, such as games, sports and fitness, walks and rides, amusement parks (e.g. Mirabilandia), as well as sunshine, relax and culinary delights. Visitors can thus create their personalized holiday. Finally, nature lovers and hikers will enjoy walking through the Punta Alberete Oasis and its quiet flooded forests sheltering rare bird species, visiting the NatuRa Museum of Sant’Alberto, that borders on Comacchio Valleys, and the ancient Pinewood of San Vitale and Classe, real natural monuments that are part of the nature reserve of Po Delta Park.

Built by Teodoric in 520 AD. is copletely realized in Istria stone blocks.

In honor of the emperor Onorio’s sister, the lower partis covered of  marble and the higher one is all decorated of mosaics.

Domus of The Stone Carpets

One of the most important archaeological discoveries of the last decades in Italy. It consists of 14 rooms paved with polychrome mosaics and marble.

DOMUS OF THE STONE CARPETS

The Basilica has a gabled facade and a mosaic decoration (which represent 26 different scenes) inside.

Archibishops chapel or of st Andrea

All covered in marble in the lower part and of mosaics in the higher one.